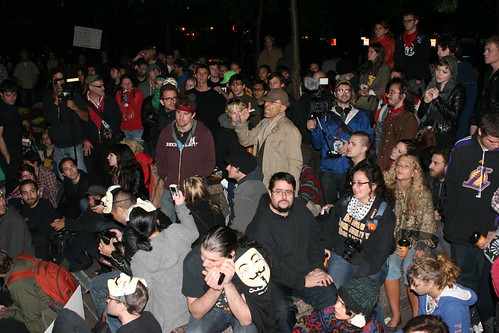 Hundreds of people converged on Wall Street this weekend to protest corporate influence over politics, an event that began Saturday after a call to action from the nonprofit magazine AdBusters and from members of the Internet group Anonymous.

It's supposed to be a long-term occupation in the style of assemblies seen earlier this year in Spain, and, of course, with shades of the long-term occupation of Tahrir Square in Egypt. That said, it's unclear if the protest, with few arrests, no reports of violence from the police to fuel tempers, and little sustained interest from mainstream media, has enough steam to last past today. Either way, it's the latest example of how the availability of Internet tools has changed the way political dissent can be organized and supporters deployed.

The folks behind the protest, which they're calling #OccupyWallStreet — yes, combination protest and hashtag — are maintaining voice-over-IP conference call bridges for organizers to use to put on protests, in the hope that this event will become a nationwide or worldwide phenomenon. There's a donation widget to give money to keep the lines open. A forum allows people to declare their support, attendance, or need for a ride. There's a map of well-wishers, supporters and participants:

There's also a live video feed, with the somewhat aspirational title Global Revolution. Who knows if that will ever be as appropriate a moniker as the protesters hope it will become.