How to Hack Public Meetings 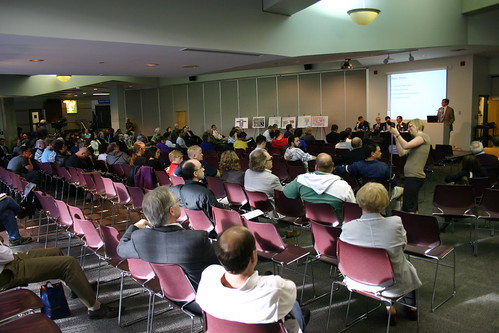 Hidden in dusty cabinets and squirreled away in boxes in city halls across the country, the minutes of local government meetings record the civic pulse of America's towns — but people rarely have the time or inclination to find and review them.

Matt MacDonald of Watertown, Mass., is working on a solution to that problem using open-source tools. MacDonald, director of project management at a public radio startup, lives in a town that makes meeting minutes available online — but only as digital copies of paper documents. There's no way to browse documents by topic or speaker. There's no way to remix the minutes with other materials; readers are stuck with boring old PDFs.

Enter He Said, She Said, proof of concept for a web application built on Ruby on Rails that screen-scrapes and parses the PDFs of six years of meeting minutes into readable text, identifies speakers associated with specific remarks, and surfaces all of this in a web application.

It's not finished: It can't surface quotes by topic, for instance, and its searchability is very limited. But MacDonald has still found a creative way to get around the inefficiencies of his local government. For him, the point is to lead by example.

"Short term I'd like to continue building real world, useful experiments and hacks to demonstrate to local government employees, elected officials and citizens the benefits to be gained from having access to civic data in programatic[sic], structured formats," he wrote to me last week in an email. (But he says the same on his own about page.) "Having existing, working examples should help guide government employees and more importantly encourage citizens to require their local communities provide this level of service and information."

In the long term, MacDonald is hoping that tech like this can reboot local government into a new form with greater community engagement. But he's got to solve some practical problems first, like finding tools to build a program that does a better job of identifying topics, quotes and speakers.

This isn't MacDonald's first experiment. At NearbyFYI, he hosts tools that track municipal budgets over time, the responsiveness of government to Freedom of Information Act requests, and more.