Can an Obama-like Campaign Work in France?

According to a recent TNS Sofres survey, 39% of French people say the Internet will play an important role in the electoral campaign. But do presidential candidates agree?

The main opponent to President Sarkozy, the Socialist François Hollande, seems to consider the web as an important battlefield, with his 2 million budget online campaign (10% of the total) and 35 people as digital  staff.

His team works on two websites, the candidate’s website and the campaign website, called TousHollande (Everything Hollande). This choice is explained by Romain Pigenel, who is responsible for the website, in an interview to the magazine L’Express:

TousHollande.fr is not a new website, it’s the updated version of another support page created during the Socialist primary. At the time, the website aggregated blogs and tweets of supporters, but it was less known and way less structured.

Today FrancoisHollande.fr is devoted to the declaration of the candidate, not to create confusion with the message. TousHollande.fr is aimed at activists in a broaders sense, not only to members of the Socialist Party.

Now the campaign website is a fully operational and dynamic site that lists all the contents produced by the campaign and some from the candidate’s website. 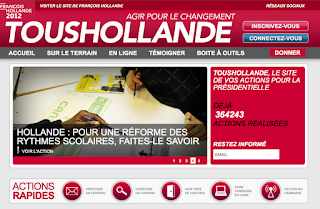 While the candidate’s website shows a list of videos and speeches, here the call to action is visible: in the homepage a list of actions that supporters can take both online and online is immediately
available. Volunteers can create their own account (“Mon compte” in French). On the left column the list of the most active volunteers is also displayed.

Sounds familiar? The resemblance with My.BarackObama.com is not just part of the lessons that every political campaign is trying to apply since 2008. A turning point in the campaign happened in fact last February when Blue State Digital started consulting for the campaign, bringing their expertise to mobilize supporters and votes that proved successful in the Obama campaign.

The Hollande campaign is learning a lot, especially on voter segmentation: “We followed the advice of Obama’s Blue State Digital, to adapt the communication to voters, creating  customized messages for them”, declared Vincent Feltesse, Hollande’s online campaign manager, to L’Express. Seven different categories have been created based on the visits to the website, the magazine reports.

Another crucial tool so far is the use of email. As noted by Le Monde, there’s a peculiar problem in France: email databases can be built only with the explicit consent of the users and it is against the law to buy and cross email lists and databases.

Here, the primary election gave a competitive advantage to the Socialist Party and their candidate: they could start their engagement campaign with a list of 650,000 supporters that willingly gave their address when they voted in October (in two rounds).
Feltesse declared that the number has grown a lot, but refused to give updated numbers.

The Hollande campaign definitely thinks of itself as the tech-savvy campaign in this race: they use Instagram to show pictures from the campaign trail, Tumblr to collect videos, pictures and articles mostly referred to the online campaign (a bit self-referred, maybe, but interesting) and even some moments of fun in the HQ. Back in February, the candidate released his campaign playlist on Deezer, a few days after Obama had did the same on Spotify (President Sarkozy released his songs list on Deezer, as well.)

“The news in this campaign is that the web became a tool to mobilize people. We are on every social networks [...] but this year, the web is a successful way also to fundraise and canvass door to door.” recently said Feltesse in an interview to the French news site 20minutes.

In the footsteps of the Obama campaign, Hollande staff has launched the “5 millions knocked doors,” a canvass initiative particularly focused in areas that register a high rate of abstensionism (in France citizens do not need to register to be able to vote).

The activity was not new in France but this year the Socialist Party could refine it thanks to three French grad students who created an improved mapping of the country using their knowledge of statistics and economics.

The map, based on the vote turnout in last elections (the regional ones, held in 2010), has been embedded on the campaign website to locate the areas with the highest potential: a
supporter willing to join the initiative just needs to provide his ZIP code to be contacted and be part of a local group, explains Slate.fr. 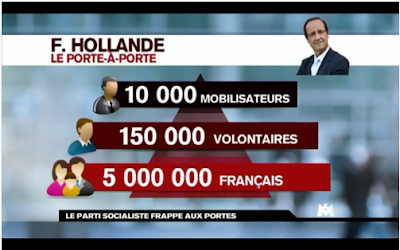 But there is also another area where a savvy use of social media may prove game-changing for the first time. In 2008 the Obama campaign showed how the web could be used for small-donor fundraising (and the Dean campaign had indicated the path in 2004), but in Europe the situation have always been different: campaigns are usually financed mostly by parties and, in many cases, parties have lots of financial support by the government.

In France presidential candidates who obtain at least 5% of votes are entitled to the reimbursement of half of the ceilings on expenditures (which are strictly defined for campaigns at any level). For these reasons online donations to campaigns have not been a
decisive factor so far.

But the Hollande team seems to be focusing on this, as well: visting the candidate’s website, an invite to donate is promptly displayed (the website currently displays Hollande’s declaration on a shooting in a Jewish school, happened last Monday in Tolouse.)

And the email list built in the primaries is proving useful in this area as well, with significants results registered in these past weeks: “Every week, we call on our supporters through our newsletter and we mobilize between 50,000 and 80,000 euros, for different projects.” Vincente Feltesse said on the matter.

But where is the candidate when it comes to Internet policies?

For some time, in France the discussion around technology and politics has been mostly focused on Hadopi, the 2009 copyright law that introduced the “graduated response”, also known as “three-strikes law”, that can end up in the suspension of Internet access for copyright infringers.
The law is usually indicated as a bad practice in this field, but this is not an easy take for Sarkozy’s opponent, as he has to balance his stance against the law with the protests of artists. He attempted to do so in an op-ed published on Le Monde, where he said that a new economic model has to be created and will have to combine different solutions.
A detailed proposal has been awaited but it is yet to be seen. “We will replace Hadopi by another law, which will build a better equilibrium between civil rights and the defense of intellectual property. For this purpose, we are engaged in a large consultation of all stakeholders so as to reach a fair solution for the benefit of all parties.” wrote me Fleur Pellerin, Hollande’s digital policy advisor in an email interview.

Pellerin also argues that the candidate is focusing on the broader picture: “It's a very popular topic,
especially for digital natives and for mass media. However, we think that other topics are much more important. François Hollande is convinced that digital economy is a key leverage for neo-industrialisation and that France should use it to gain competitive positions in emerging and growing markets.”

Even if the economy is a crucial topic, at the moment it does not seem likely that the digital economy will be as much discussed as Pellerin wishes, as the topic was not broadly explored in the public debate, except during the protests against ACTA (opposed by Hollande), the international agreement that sparkled a Europe-wide debate.

Will an Obama-like campaign be enough to generate the kind of mass participation in online
politics in France that we see in the US?

In France, it is not the first time that relevant political conversation happens online. The country has a relatively old political blogosphere that played an active role in the 2007 campaign, but social networks may well be considered the biggest news in the media scenario since then.

France, though, has been slower in the adoption and use of social networks, compared to other countries. Facebook, for instance, is the most used social network, with 15 million users (France’s population is about 61 millions), while Italy, that has roughly the same population as France, counts 27 million on Facebook.

Even though Twitter founder Jack Dorsey was greeted by both candidates last week, his creation was little used until last summer, in coincidence with the arrest in New York of Dominique Strauss Kahn, former head of the International Monetary Fund, and a French presidential hopeful until that moment. According to a word analysis created by Owni.fr on the bios of the candidates’ followers the two recurring words are “politics” and “journalist”, which seems to support the impression that the tool has mostly been used by people professionally involved in the campaign, so far.

In a web campaign guide published by "RSLN", Microsoft France’s webzine, it is said that almost 80% of French voters are now connected to the Internet, with a 20% estimated growth compared to five years ago, when the last presidential election took place.

Next April 22nd, the first round of elections will show a partial outcome of the Socialist candidate’s online campaign and will answer a question that communication and politics professional are asking themselves: is it time for an Internet campaign in France?