Some weeks ago I wrote about ZNasichDani.sk ("From Our Taxes" in Slovak), an application that was among the winning projects of the  Open Data Challenge, a big open data competition promoted by the European Union.

The tool aims at empowering citizens, helping them to figure out links between companies and government and asking them to help review the connections including the contract prices.
As explained by Eva Vozarova from the Fair Play Alliance:

The idea was a simple one: to scrape the Public Procurement bulletin, access the database of Business register of the Slovak republic and connect both types of data, in a way that would match persons with the names of companies in which these persons are or once were active, and with financial volume of the companies’ state contracts. [...] All of us tried to visualize connections that are not necessarily obvious at first glance, and we were all very interested in the mechanisms of doing business with the state. 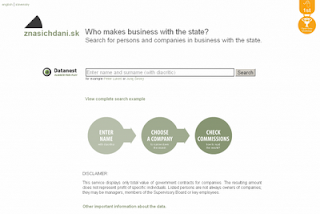 But their work quickly ended up in creating problems to some of the people involved: one of the contractors that was mentioned in the database went to the court of Bratislava, which released a preliminary injunction requiring the removal of information concerning that person from the site.

[On the OKFN blog Vozarova identifies the contractor as "Mrs. Jarmila Považanová, a statutory in Strabag, one of Slovakia’s biggest construction companies, and a former representative of other well known companies – most of them participating in big construction tenders in Slovakia"].
The team that build the app - Vozorova writes - appealed the preliminary injuction not only because they considered it as a form of censorship but also because they found the ruling unclear and impossible to apply

But what exactly did they want us to do? ZNasichDani.sk makes no connections of financial values to the claimant’s name; the website only filters information and shows the results side by side. More than that, how could we erase the sum or the claimant’s name in a way that would be technically possible and would not compromise the rest of the service? The site is a mash-up; both Public procurement bulletin and Business register are publicly available sources of data. The Business register is being requested by our application in real time – we do not have read/write access to its database and cannot remove names of dissatisfied subjects on request. Neither can we erase financial values – one such case would influence the quality of data on the whole website, because other entries would become incomplete.

In the end the team decided to remove from the site the total amount of the value of procured contracts of companies where Mrs. Považanová is or was active.
What are the people at ZNasichDani.sk going to do?
Here's how Vodorova answers:

After the website was first launched we got calls form entrepreneurs and politicians pressing us because of media misinterpreting the data. But knowing that this would happen, we decided to act accordingly from the start:
1. Not to interpret any information ourselves, only to provide facts and numbers.
2. Explain sufficiently, on the website and in the media, that ZNasichDani.sk does not contain information about personal profit of listed persons, only about values of companies’ contracts with the state.
3. Make clear that we don’t only monitor entrepreneurs, but also managers, members of boards and statutory bodies of companies.

Director of the Fair Play Alliance, Zuzana Wienk, defined the court decision as a violation of the Slovakian constitution, as it restricts the dissemination of information from public sources.
On the other side Mrs. Považanová claims that the spread of that information cause a damage to her.
But the preliminary decision doesn't solve the matter as the sources are public and the information still available: the site is in fact a mash-up and the data sources are public.
This creates a practical problem - how to comply to such an injuction without compromising the whole project. It also presents a challenge for the law, which is way broader: how to adapt (and update) the laws to deal with cases like that.
Many questions and potential problems about how to deal with individual privacy and public data are left – a gap that should be filled not only with new laws but with a thorough and informed reflection on information and how it may now circulate in unprecedented ways.