"During movement times, the people involved have the same problems and can go from one communication to the next, start a conversation in one place and finish it in another. Now we're in what I call an organizational period, which has limited objectives, doesn't spread very rapidly and has a lot of paid people and bureaucracy. It's completely different from what takes place when there is a social movement."
— Myles Horton, from his book "The Long Haul", talking about his work with two American social movements, the labor movement of the 1930s and the civil rights movement of the 1960s.

From the streets of Tunisia to Wall Street, and online from the WikiLeaks wars to the early election skirmishes of 2012, this has been a tumultuous time. Next year, who knows, maybe everything will just get really boring. Though we kind of doubt it. But in case you missed anything, or just want a refresher on what went down on these pixels, here's our subjective, selective and unrepresentative sampler of the Best of techPresident 2011.

In the early days of the revolution Egyptians are still fighting to keep alive, Nancy Scola ran a round-the-clock live blog to track and highlight the new and newish way that citizens and governments adapted revolutionary and counter-revolutionary tactics for use in the networked world.

Among her observations is this gem, written on the occasion of Hosni Mubarak's regime severing Egypt's access to the broader Internet:

The global shock and horror that greeted the Mubarak government's order last night to shut down Internet and mobile connections isn't, one imagines, what we'd see if they had closed the country's gas stations or even ordered all of Cairo's major roads shut down for the duration of the unrest. But it becomes almost a personal affront to anyone who uses and really likes the Internet to think that a leader of a nation would have the gall to simply shut down the Internet in his country. The idea of an entire nation of nearly 80 million people suddenly being dropped from the global network has a particularly horrifying character to it. It's the very idea of heightened connectivity that carries power, not necessarily the particulars of what people do with it in times of crisis. Simply put, it's the idea that is the Internet that political leaders like Mubarak will find themselves wrestling with in the future, not simply the tweeting or wall posting itself.

Writing a few days later, Micah Sifry suggested that if any technology played a catalyzing role in the uprisings of the Middle East and North Africa, it was the mobile phone.

"Could it be," Micah asked, noting the high number of mobile subscribers per capita in Egypt, Tunisia and Jordan, compared with low subscription rates in Iran, Syria, and Yemen, "that what we're witnessing is the political coming of age of Generation TXT?"

Of course Malcolm Gladwell disagrees with us. In the New Yorker, he wrote, a few days later, "Please. People protested and brought down governments before Facebook was invented. They did it before the Internet came along."

One really wishes there were more meat on this bone. Surely the world is crying out for some well-done critical analysis on the subject. But, frankly, the premise doesn't make a tremendous amount of sense. Of course, people have long been oppressed, frustrated by dysfunctional governments. People have long rebelled. But hasn't the Internet managed to shape other fields of human endeavor that somehow existed before it came along in the late 20th century? People consumed the news of the day before social media. That doesn't mean that Twitter, Facebook, YouTube haven't changed how people learn about and discuss the world.

This argument would turn out to be one that would continue throughout the year.

Micah's first post connected the dots between the Arab Spring, Wisconsin, the protest movements in Europe and OWS:

America is about to experience the same youth-driven, hyper-networked wave of grassroots protests against economic inequality and political oligarchy that have been rocking countries as disparate as Tunisia, Egypt, Israel, Greece and Spain. The occupation of the Wisconsin state legislature last winter was a harbinger, but now all kinds of previously disconnected individuals, loosely centered on a core of beautiful-style troublemakers and inspired by events and methods honed overseas, are linking up and showing up to occupy symbolically important centers in their cities, from near Wall Street in downtown Manhattan 15 days ago, next to Chicago a week ago, to an explosion of events all over major cities across America this weekend, including at the Federal Reserve building in Boston, MacPherson Square in Washington, DC, to city hall in Los Angeles, plus more than 100 others. This thing is growing in Internet time and no wonder, for it is built on networked culture.

A follow-up took a close look at why other efforts to kickstart populist protest at economic inequality in America hadn't succeeded prior to OWS. Nick Judd explored how open-source technologist approached belonging in OWS. And Micah shared his take on "leaderfull" rather than "leaderless" movements.

"No, political movements can't be leaderless. The Occupy Wall Street movement is, in fact, leader-full," Micah writes. "That is, the insistent avoidance of traditional top-down leadership and the reliance on face-to-face and peer-to-peer networks and working groups creates space for lots of leaders to emerge, but only ones that work as network weavers rather than charismatic bosses."

Throughout the year, Nick has been tracking the work of civic hackers around the country — people who hope to make their local governments more open, transparent and participatory through the use of technology.

In October, he described the culture clash this can often entail, as experienced by Code for America, a new program to put Silicon Valley technologists in city halls across the country:

When the project launched, I saw it as a test of a simple premise: Given coding talent and information-technology knowledge, big municipal governments can make their cities better without spending a whole lot of money. Another high-level objective that I didn't pick up on right away was to bring the rapid-prototyping style of modern technology companies to city government. And there's always the idea that the cool stuff these technologists make will in turn make cities easier to use and more fun to live in.

Turns out this is all harder than it sounds — except for the bit about cool stuff that makes cities more fun, but more on that later. The program last week celebrated a transition from its first year to its second at a conference in San Francisco called the Code for America Summit, where city officials and Code for America fellows described months of work that put in stark relief the differences in culture and approach between local governments and technology startups. 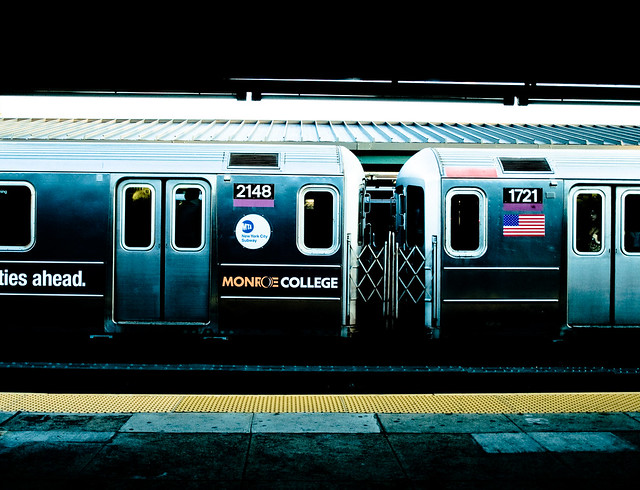 Rights of Way: How much does your commute say about you, and who gets to know? Photo of a 7 Train in Queens, N.Y. by Rafael Castellon / Flickr

This national organization is just one example of what is a growing trend. In cities like Boston, Baltimore, New York (and again), and Chicago (especially Chicago), government officials are trying to figure out how to get their arms around the interest and enthusiasm of talented developers. States like New Hampshire are in on it, too.

The rise of the digital city brings with it new questions about public space, Nick wrote in September, noting what some thinkers and doers are calling the digital public way:

At what level does interaction become intrusion? And at what point, in an age of things that change how they react to you based on a guess about who you are, does a content deal become a violation of privacy? These are all valid questions already, and they're growing in validity. What we're seeing is the rise of something Chicago Chief Technology Officer John Tolva described to me as the "digital public way:" That hodgepodge of digital objects in public space that are encountering city dwellers here and there throughout daily life as much as the city dwellers are encountering them.

It's also getting ever easier to take what we know about the world and map it — creating tools for advocacy, planning, disaster relief and more. In June, Nancy explored what that means by talking with eight prominent people in the digital mapping space.

And the consequences of transparency can sometimes be troubling, as Micah observed in his critical response to WikiLeaks' decision to post the entire unredacted State Department cable set on the Internet.

These are just some of our favorite posts from the year. What are yours? Please share — whether it's from our archive or from around the web — in the comments.