PdF France: The Web as an Innovator of the Public Debate 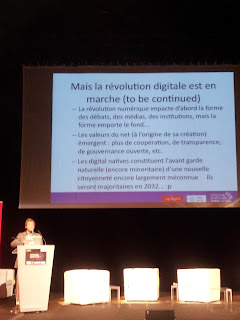 At PdF France, La Netscouade’s co-founder Benoît Thieulin analysed the role of the web in the French public debate in the past ten years and explained how it will be shaped in 2012.

As I wrote on Monday, “Compared to other European countries, the French blogosphere has a relatively long history. In 2005 the adoption of a European Constitution was rejected by French voters and the “no” campaign was conducted also in the blogosphere, against the urgings of many in the political class to vote “yes”. This event eventually led blogs to become rising voices in the French political conversation.”

Thieulin argued in his talk that this was a seminal event. The birth of a system of new voices in the public debate scared journalists with the disruption of the media scenario they were used to, and in which they were the unquestioned leaders.
But, he added, the rise of these new voices also led politicians to create a direct dialogue with citizens on the web in the following years.

This process was in fact fundamental in the rise of Ségolène Royal—whose online campaign Thieulin devised as the opponent of Nicolas Sarkozy in the 2007 presidential election. Royal was the underdog in the primaries of her own party: she won them with a campaign that engaged people on the local level through a social network, called Désirs d’avenirs, an idea quite similar to the one that animated mybarackobama.com

Creating a movement from scratch in just 6 months was not enough to win the election, though: content was created by citizens but had little impact overall, Thieulin admitted.

As Linkfluence CTO Guilhem Fouetillou (also a speaker at PdF France)recently explained, the online public debate in France slowed down in the years after the 2007 election. Quoting from my previous post on the French political blogosphere:

In 2009 the web continued to grow but things were not the same for the political blogosphere. The 2009 map of the blogosphere had 40 percent fewer sites. On Le Monde Fouetillou explained the development of this stage: “This may sound counter-intuitive but that’s what happened: two years after the election of Nicolas Sarkozy, the blogosphere growth rate decreased and the activists engagement during the presidential election disappeared.”

Who will guide the debate in 2012, then? That was a central question addressed by Thieulin in his talk  at PdF France.Things have changed: we are not talking anymore about an élite of informed bloggers, he warned, but of an online daily discussion of millions of people. For instance, it has been estimated that 27 million (out of 65 millions) French citizens will be on Facebook by 2012. And these citizens will be exposed to a continuous flux of information with the mobile evolution.

La Netscouade’s founder also added some insights on the evolution of the online conversation and on the role of these new actors in the upcoming months, which will be heavily characterized by a political campaign for presidential elections, happening next spring.

2012 will be the year of rich content, he said: people are immersed in all kinds of data and need new ways to understand this huge amount of information: video, infographics, educational tools will be key to communicate the campaign and the candidates’ programs in a public debate that has citizens as new actors and not as mere listeners anymore.

But who is producing this content?
If we think of the “digital debate” as people discussing news with their friends on Facebook, we can’t expect it to be based on content produced by citizens: in France, 2012 will be then also the year of the comeback of journalists and think tanks, argued Thieulin.

But they will both have specific roles, he added: journalists need to give up on the monopoly of production of information and rethink themselves as gatekeepers that can select and decode information. Journalists should also be able to explain and clarify news to the people by using data visualizations and all the other new tools: they have the power and the resources to do that for the masses.

By contrast, Thieulin asserted, French think tanks have come strongly into the public debate in the last 4 years: their research activities can be key to create new categories for the public debate, questioning the general interpretation of facts and provide specific expertise on issues.

The online debate may well influence the election, concluded Thieulin: as happened in the past, “The Internet loves the outsiders” and the lack of resources can push to innovate campaign communication. Sure, the debate can suffer from all the common reasons for criticism of the online conversation: the spreading of false rumours, the lack of factchecking, and the tendency to conspiracy. But the public space for debate is ending up nurturing a new scene of actors that can now interact in ways that have been evolving through the years. And a new idea of citizenship, also made of public discussion in different online outlets, will eventually grow with the digital natives.

Well, joked Thieulin, they will be a majority around 2032, but... “La révolution digitale est en marche!”