The Europe Roundup: A Network To Feed The Neigbourhood

Greece | Boroume: A Network To Feed The Neigbourhood

Greece, the European country that is suffering the most from the debt crisis, is dramatically facing a common Western country paradox: while millions of people are hungry or malnourished because of the crisis, tons of food is still thrown away daily.

A group of volunteers and some restaurants started an initiative called Boroume (Greek for "We can") to combat excess of food waste: citizens have built a network of people and food outlets that tries to spread the word on needs of small communities and try to get locals to help by using a contact form on their website and a Twitter account.

The volunteers work in collaboration with the Food Bank, a foundation that fights hunger. The Food Bank is part of the European Federation of Food Banks (FEBA) which operates 160 food banks across 12 countries of the European Union.
The food is not stored but transferred instantly to the foundation or, in some cases, used immediately in the community that asked for help.
Boroume asks to support the Food Bank with donations but, most of all, the invitation is to focus on the local communities: "Talk to your neighborhood bakery, a restaurant, a company catering and convince them to become part of this chain."
The organization claims to feed about 27,000 people per week.

The Moscow Times reports that private e-mails by political activist Alexei Navalny have been leaked.
Navalny, a controversial blogger and activist (The New Yorker profiled him back in April) gained popularity two years ago when he exposed embezzlement of public funds and, since then, he has been widely known as an anti-corruption campaigner in his country and abroad.

The letters were published online on a newly created LiveJournal blog, onenavnav, and mirrored on a Kazakh-based web site.
Some observers suggest that the leak might be connected to plans to discredit Navalny, expecially on behalf of United Russia, Vladimir Putin's party and one of Navalny's political enemies. Russian newspapers Novaya Gazeta reported these rumours earlier this month but United Russia denied such an allegation.

The anonymous blogger who released a 1,040-page Word document with the letters claimed they expose Navalny as a corrupt ultranationalist financed by U.S. authorities. But a review of the letters found they contained little in the way of incriminating evidence.

The incident is reminiscent of the 1990s, when drudging up dirty laundry was a staple of political life. Once used in Kremlin turf wars, the practice has been recently applied to opposition activists and, as such, the leaked letters may confirm Navalny's clout with the opposition rather than ruin it. Navalny's letters were published late Tuesday

In May the activist was accused of fraud by Moscow prosecutors.

Navalny could not be reached for comments: "He wrote on Twitter that he did not have time to read the letters, but excerpts shared by friends indicated that at least some of them were real. He added that some letters might have been doctored, but did not elaborate." says The Moscow Times.

Yesterday Prime Ministers from all over Europe gathered in Brussels to discuss a deal on the debt crisis. While at the summit, Italian Prime Minister Silvio Berlusconi took time to do a quick interview with a late-night TV talk show in Italy. Berlusconi claimed that German PM Angela Merkel had apologised to him for the "smirks" between her and Nicholas Sarkozy last weekend when asked about a recent deal negotiation meeting with Berlusconi.

Italian blogger Filippo Sensi, known as @nomfup on Twitter, promptly tweeted the declaration directly to Steffen Seibert, Angela Merkel's spokesman (@RegSprecher on Twitter). Seibert denied the event saying there had been no apology "because there was nothing to apologise for". 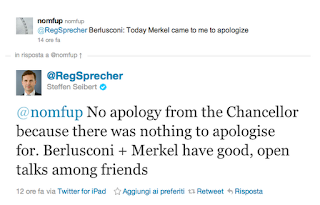 The episode happened around 1AM and quickly reprised in the morning by news agencies, TVs and newspapers, an event quite unusual in countries like Italy.
A roundup of reactions is available on Nomfup blog.

EU | The night of the tweeting journalists

As the EU debt deal summit ended very late, only a handful of journalists liveblogged the developments when all newspapers had already closed their morning editions.
Researcher and euroblogger Ronny Patz publishes a list of these tweeting journalists in Brussels.
"At 3.30 in the morning of 27 October, tweets of most of these journalists were coming in announcing that a deal had been found." says Patz.


From October 20 to 22, during the three-day vote for Tunisian living abroad, Tunisian voters in France have joined the “Blue Fingers Club” Facebook and Twitter are flooded with pictures of inked-stained blue fingers, proof that they have - many for the first time in their lifetime- cast their ballots and are now part of the select club of early voters in the historical Tunisian constituent elections that culminates the Tunisian revolution. 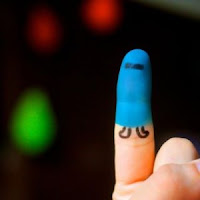